The Manitoba Canary and Finch Club is a group interested in canaries and finches and the promotion of aviculture.

On Thursday, April 28th Winnipeg City Council upheld the motion to remove exotics from the Responsible Pet Ownership By-law Review. This motion was first introduced on April 11th at the Standing Committee and also passed the Executive Policy Committee on April 20th. This resolution means that Winnipeg Animal Services will no longer be working on recommendations regarding exotics.

From August 2021 to March 2022 MCFC actively campaigned against the proposed list of ideas published by Winnipeg Animal Services in March. Some of which included:

• Low ownership limits that would effectively eliminate breeding and aviaries

• Ban on the rehoming grandfathered exotic animal species in Winnipeg

The supposed justification for the species bans was that it is not possible to provide adequate care and quality of life for any exotic pet, and that low limits of “allowed” species were needed to address and prevent hoarding.

MCFC has always acknowledged that there is room for improvement with the existing by-laws for exotics. Since August 2021, MCFC worked hard on developing recommendations that would better reflect the values and needs of owners and their animals. This included recommending to Winnipeg Animal Services and councillors:

• Species ownership limits that factored in the needs of typical parrot owners, most aviarists, and small to medium scale breeders

Hoarding is a rare but unfortunate occurrence and MCFC’s goal was to ensure that the majority of good bird owners would not be overly impacted by the by-law recommendations. MCFC was steadfastly against the introduction of an approved-only species list and species bans for birds. It was never clearly demonstrated what the criteria was for choosing species to ban, the scope of the problem needing to be addressed in Winnipeg, and how the bans would actually affect change. Banning bird species remains highly subjective even with the development of guidance criteria.

The efforts by animal right groups Zoocheck, Animal Justice, and World Animal Protection to end exotic pet ownership and lobby for an approved-only species list was unreasonable and ultimately undermined the whole by-law review from MCFC’s perspective. MCFC and other stakeholders had to put an immense amount of effort into lobbying against this messaging, which significantly reduced our ability to support finding solutions to specific issues affecting the exotics community in Winnipeg. In addition, a lack of transparency and messaging from certain parties involved as to what they were lobbying for left MCFC and many others in the dark. This is why MCFC ultimately supported the motion to end the exotics by-law review. There was a great deal of distrust in the process.

MCFC anticipates that the by-law review for exotics will be restarted sometime in the next election cycle. It is MCFC’s hope that a future by-law review regarding exotics will have more focused goals for addressing problems relevant to Winnipeg and have reasonable expectations regarding species bans and limits. MCFC would like to see a positive outcome achieved during the next by-law review. An outcome that will provide animal welfare groups and Winnipeg Animal Services with a better means of addressing unfortunate cases of hoarding and neglect whilst respecting the values of exotic pet owners and industry.

We have some good news to report. Winnipeg Animal Services will not be making bylaw recommendations pertaining to birds and other specialty pets at the City Council meeting in December. Instead, they will be asking for a significant extension of time to continue working with local stakeholder groups in the development of future recommendations. We support this move, as it means that this complex issue will not be rushed and there will be more time given to addressing the concerns of Winnipeg's avian community. Thank you for your involvement and support with opposing the proposed RPO bylaw.

REGARDING BY-LAW CHANGES TO BIRD OWNERSHIP 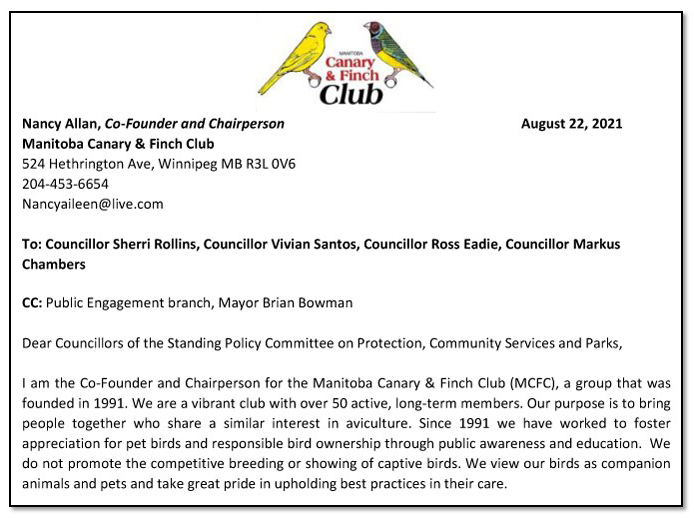 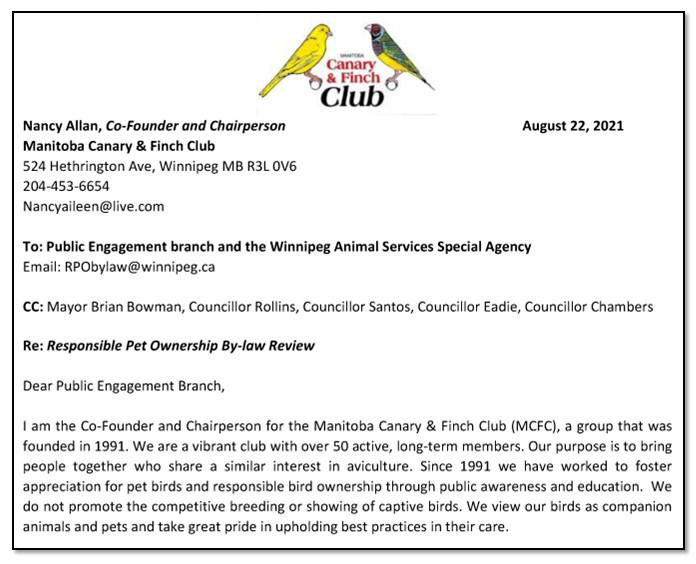 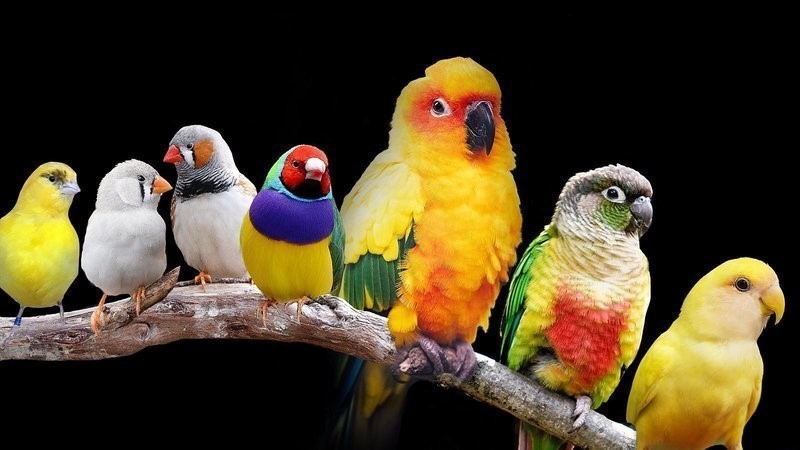 To support our cause, please help spread the word and most importantly, send the Public Engagement branch (

RPObylaw@winnipeg.ca) and your local city councillor, by August 31st, your objections and concerns! Without your feedback this proposal could be ushered through this fall.

Stop the City of Winnipeg from banning ownership of pet parrots, finches, and canaries!

Please support us by asking the City of Winnipeg to reject the ban on bird species and limitation on how many you may own!

On August 10th the City of Winnipeg’s Public Engagement branch published a Responsible Pet Ownership By-law Review that includes sweeping and drastic changes to pet bird, reptile, amphibian, and fish ownership in Winnipeg that will see thousands of families and their pets adversely impacted. We need you to sign the petition posted at

https://www.change.org/p/public-engagement-branch-protect-winnipeg-pet-parrots-finches-and-canaries?source_location=petitions_browse and provide a comment. Please also write to

RPObylaw@winnipeg.ca and your city councillor, by August 31st, with your objections and concerns! The proposed changes are the most restrictive across all of Canada!

The Manitoba Canary & Finch Club has launched this petition against the City of Winnipeg’s alarming proposal to ban the ownership of almost all species of parrot and greatly limit what finch and canary species may be owned. In addition to the species bans, individuals and households would be prohibited from owning more than 5 birds. Other groups such as reptiles, amphibians, invertebrates, fish and small mammals are also impacted with a large number of arbitrary species bans and possession limits.

If approved by council, this by-law amendment would mean that for parrots, only budgies and cockatiels could be owned in Winnipeg as early as January 2022. All other common parrots such as parrotlets, lovebirds, conures, caiques, quakers, amazons, cockatoos, African greys, and macaws would be illegal to own and rehome. For aviary hobbyists, the variety of species would be limited to just 26 of over 52 species of finches and 1 variety of canary. The practice of breeding any exotic animal would be prohibited. Current owners of banned species under this proposal would see their animals grandfathered. However, it would be illegal to rehome animals within city limits, presenting very real challenges that could threaten the safety and wellbeing of both people and animals.

The stated purpose of the by-law proposal is to “keep both pets and the community safe” and “ensure that pets are properly cared for and not placed in at-risk scenarios.” The city has disingenuously attempted to do this by banning species and limiting the number of animals that may be owned rather than focusing on what is actually important: setting out minimum standards of care and promoting public education. Banning species and placing arbitrary limits on the number of birds that may be owned does nothing to address the principles of animal welfare quoted by the city, which include the provision of food, water, and shelter and to ensure that pets are kept in good health, are able to express natural behaviours, and are not subjected to mental suffering.

Main reasons why the by-law proposal for exotics should be rejected:

1. Appropriate consultation with affected stakeholders and the public has not taken place and the short amount of time for feedback is unacceptable (public engagement period ends on August 31st).

2. Pet birds are considered companion animals very much like cats and dogs. They interact abundantly with people and enjoy doing so. Parrots are excellent, highly interactive, affectionate, and entertaining pets.

4. The limit of five birds per household would effectively end the lifestyle of keeping aviaries of domestic finches and canaries, a hobby that has existed since the 15th century.

5. Pet parrots, finches, and canaries in Winnipeg are not sourced from the wild. The reputable captive breeding of these birds across Canada ensures that black-market demand for illegal trade in wild-caught birds is very low to non-existent. However, this could change under the proposed by-law if captive breeding and sale is banned, thereby increasing black-market demand and threatening wild populations.

6. There is no evidence that there is an overabundance of pet birds in Winnipeg. Parrots, finches, and canaries do not frequently end up in animal shelters and current levels of breeding help meet demand both within Winnipeg and across Canada. The breeding of most bird species is a specialized skill that requires dedication and is therefore only done by a small subset of bird owners.

7. Like cats and dogs, cases of hoarding birds are very rare and should not reflect negatively on the majority of good bird owners.

8. Local businesses and vets that specialize in bird care and husbandry will be greatly impacted, resulting in fewer services and resources for grandfathered birds."

Below is a PDF of our petition.  We ask that if you are able to print it off to do so and distribute to as many pet stores, vet clinics, etc., as possible.

Time is of the essence!

Remember where you have dropped them off as we will have to collect them when the time comes to present them to the city.

SITE DEVELOPMENT BY LINDA A. RUDACHEK